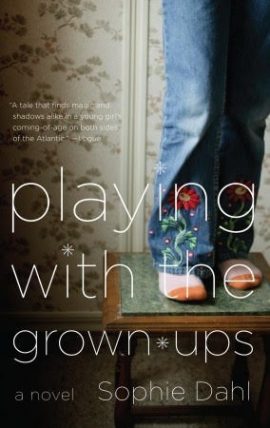 Kitty loves living at the isolated Hay House with her doting grandparents, but it cannot provide the adventure and excitement that her restless, bohemian mother Marina craves. When a guru sees Marina's future in New York, Kitty is torn from her home and bounced from place to place—first a colorless boarding school, then an American ashram, and finally back to an unfamiliar England. But soon, no god, man, or martini can staunch Marina's hunger for a happiness that proves all too elusive. And Kitty, turning fifteen, must choose: whether to play dangerous games with the grown-ups or put herself first.

“The voice of teenaged Kitty is spot on..Dahl is really very funny, genuine and touching.”
The Independent

“A lush, rhapsodic coming-of-age novel..somewhere between Absolutely Fabulous, I Capture the Castle and Hideous Kinky.”
Time Out

“Deftly written. Peopled by great British eccentrics, it is oddly ageless.”
The Guardian

Buy Playing with the Grown-ups