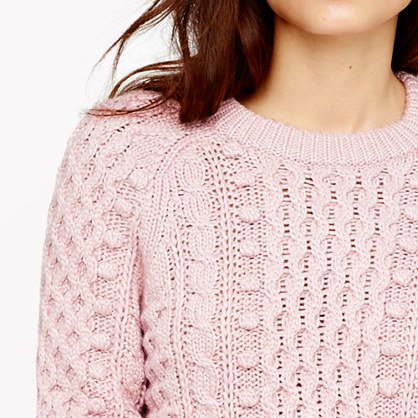 The first cashmere sweater I owned was dusty sugar pink, and I wore it so a boy I liked would want to put his arms around me. I imagined us at the pub, his hand resting with ownership on my soft shoulder. I was 15 and had yet to understand boys or see “ownership” as a rather sinister concept; all I knew was that the sweater could draw touch. It had been a Christmas present, and hidden within its gossamer folds was, I knew, the key to sweater-girl-sophisticate heaven. Lana Turner, Jane Russell, eat your hearts out.

I paired mine with drainpipe jeans, jeans so tight that I had to lie down on the floor and pull the fly up with the aid of a coat hanger amid much anguish and breathlessness. When they were finally, mercifully, painted on, I found myself like a cow that had been tipped, unable to actually rise off the floor. Such was the level of my denim constriction. My younger brother and sister were summoned with a bellow, and shrieking with laughter, they pulled me stationary. I hobbled from the house, an Afghan coat from Kensington Market over my cashmere, into a London night filled with frost and promise.

However, the boy in question was not interested in my high-ply allure. He had recently discovered The Doors and disappeared with a snaky-hipped brunette in leather. I went home and cried and rubbed aloe on the livid welts that the jeans had carved into my hips. The cashmere sweater lay abandoned on the floor, its sheen belonging to another girl.

And then some years on, I was a grown-up (or mostly). And I fell in love, quite by accident, in a similarly frosty London landscape, at Christmastime. I didn’t live in London anymore; I lived in New York, and so those first rare flushes felt as confusing and exciting as a foreign language experienced on streets that were familiar but somehow totally different – Technicolor. He sent flowers to my hotel and a stream of books, rare books, and we chatted low on the phone, long into the night. It was, as my favorite Mitford heroine called a romance similar, “a penny-novelish seduction.” I fell hook, line and sinker.

I was leaving to go home to New York. He was spending Christmas in England. We were still teetering on that dizzying precipice of courtship, where the eyes say it but the lips don’t, and no one dares name it yet because saying things out loud makes them echo forever, and there is purity in silence.

I agonised. Should I buy him a Christmas present? What was the bloody etiquette of this weird, timeless in-between phase? Would I be mortified if on receipt of a present he said, “Uh, thanks” and looked at me like my name should be Annie Wilkes? And what did you buy a man in a circumstance such as ours that wasn’t too familiar, suggestive or dull? I walked down Marylebone High Street, feeling like I’d had too much coffee, jittery and wide-eyed. The first throes of love can do that to a person, along with causing dreadful insomnia.

And then in front of me, a shop. A serendipitous, classy, old-fashioned shop that sold cashmere and wool. I went in and bought him a cashmere sweater, and they wrapped it in a beautiful box with a velvet ribbon. It was the dark green of an English wood, and it was perfect. When I went outside it was snowing, all the Christmas lights on the High Street blazing. He came to pick me up that night. It was dark enough in the car that he couldn’t see me blush. “I bought you a present,” I said. I was clumsy; 15 again.

“I went in and bought him a cashmere sweater, and they wrapped it in a beautiful box with a velvet ribbon.”

He was equally shy and goofy back. “Really?!” he said. “I got you one too.” He wore the sweater a lot, and for a year or two there were others back and forth, delivered along with that out-loud declaration of love. Sweaters of his that wandered their way into my closet, others that, down the line, after our break-up, were probably relegated to the charity pile by new girlfriends. In a gift that was possibly the territory of grandmothers – a sweater – there was a message that, to me, was so inherent. “I want you to be warm,” it said.